Echo sees great opportunities in Latin America; a region rich in resources and undergoing positive development in macro conditions. A strong demand outlook
for energy consumption and economic growth coupled with underdeveloped - but lower cost - onshore plays, makes Latin America a favourable region for Echo to deploy its expertise in support of an exploration-led growth strategy. 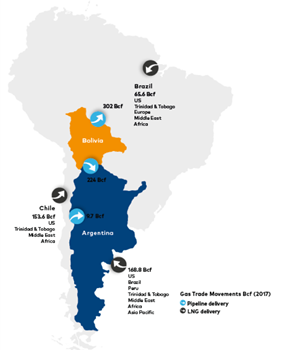 Latin America is an emerging world economy, which has undergone rapid economic growth over the last decade. Primary energy consumption has more than tripled in the last 40 years according to the BP Statistical Review of World Energy (2017).

Currently gas makes up 22% of the energy matrix, and is set for continued growth (BP Statistical Review of World Energy, 2017). Latin America looks to meet ever-growing energy demand, whilst focusing on clean energy, meaning the future is natural gas.

The need for reserve replacement is increasingly in the spotlight as key economies seek to reduce their reliance on external LNG imports and boost domestic production. Existing infrastructure across a gas hungry continent makes Latin America a region rich in opportunities within the upstream sector.

The Latin American region as a whole has proven gas reserves of 290 Tcf (4% of world reserves) and oil reserves of 330 billion barrels - 20% of world reserves (Source: BP Statistical Review 2018). However, excluding the politically volatile and isolated region of Venezuela, the region has proven reserves of 65 Tcf of gas and 27 billion barrels of oil. This reserve base is growing due to exploration activity in the region, however this is predominantly expensive offshore activity. Echo believes this offers onshore, relatively low-cost, underexplored opportunities.

A tight consumption vs production balance

Underpinning the case for further exploration is the fact that gas consumption in Latin America has doubled in the last 20 years, increasing on average 3.5% p.a. (Source: BP Statistical Review 2018). Consumption is expected to increase by a further 40% by 2030 (2.6% p.a.). Hence to meet the increase there is a strong need for reserves replacement via exploration. Production in recent years has barely been able to cover demand creating a tight consumption vs production balance. This has resulted in pipeline imports and LNG imports being required to meet demand in certain countries, achieving attractive prices (Source: YPFB). Due to the market tightness, LNG becomes the marginal cost of gas for several countries, making local production more attractive given the higher prices that can be obtained to substitute the LNG e.g. Bolivia achieving between 5.15-6.24 US $/mmbtu for gas exports to Argentina and Brazil (Source: YPFB). Bolivia has unsurprisingly committed to increase its gas export to Brazil and Argentina in the future to exploit the opportunity, but it needs companies like Echo to deliver the value creation from exploration.

Latin American is well renowned for its natural resources. The continent is estimated to hold proven oil reserves of over 327 billion barrels and natural gas reserves in excess of 290 Tcf (Source: BP Statistical Review of World Energy (2018)). Undiscovered conventional natural gas resources have been estimated to hold as much as 678 trillion cubic feet of natural gas. This highlights the scale of potential gas opportunities that Latin America has to offer.

Hydrocarbon exploration exists across the entirety of Latin America both onshore and offshore, where Echo's focus has been on proven onshore basins with existing infrastructure. These basins include the prolific Tarija and Austral basins, recognised as provinces that may hold significant potential for undiscovered natural gas reserves.

The use of natural gas infrastructure in Latin America dates back to the 1950s/60s, and the beginning of cross-border natural gas trade. Since then, a cross-border gas network in excess of 10,000 km has been constructed with the ability to deliver over 1.92 Tcf per year to neighbouring countries. Whilst such transport exists, only 12.5% of this network is at full capacity.

On top of this, 7 major LNG import terminals exist across the region with a total capacity of 33.5 billion cubic meters per year. Two further terminals currently under construction as efforts are made to try and satisfy an ever-increasing natural gas demand.

New business-friendly governments have been elected in recent years which are helping push up GDP growth forecasts to reach 5% p.a. for the region up to 2023 (Source: IMF – WEO 2018) which creates the foundation for the expected growth in gas demand, as there has been a direct positive correlation between GDP growth and energy demands. Economic challenges remain in Argentina in particular, however this offers potential opportunities for specialist companies like Echo. Furthermore, acreage has been made available to private companies from the traditional national oil companies and more regular bid rounds are being undertaken. Active deal flow across the region has occurred as a consequence and this presents additional opportunities for Echo for non-organic growth.