Tapi Aike is one of the largest new block awards in Argentina, and is Echo's high impact, frontier scale exploration asset.

An extensive 3D seismic acquisition programme covering 1200 sq km has recently been completed. These new data will be used to identify well locations for drilling with the first well location now identified.

The total work programme is consistent with that of typical frontier exploration. 3D seismic data will be acquired to increase the Chance of Success of new exploration wells using modern geophysical techniques. 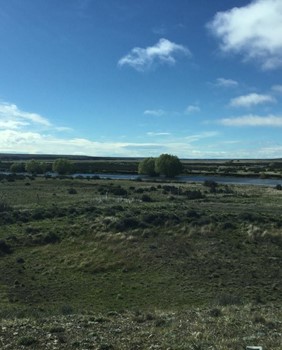 At least 3 independent exploration plays have been identified within the Tapi Aike licence. These plays were generated during the Upper Cretaceous and Early Tertiary due to changes in the relative sea level. The prospects in these plays are geographically located in the block in relation to their depositional setting.

Natural gas discovered may be transported via the major pipeline in the northern portion of the block which links the region to the rest of Argentina.

Produced gas can be processed through existing infrastructure in adjacent blocks, such as the Puesto Peter and Barda Las Vegas plants.

Natural gas may also be used for regional power generation in the existing infrastructure.

Following an initial internal assessment, preliminary estimates have indicated the Tapi Aike licence area to hold multi Tcf potential. Gross unrisked prospective resources are estimated at 4.2 Tcf mid case, 6.0 Tcf Pmean and up to 12.4 Tcf high case. Up to 41 leads have been identified, two of which have been evaluated by Gaffney Cline & Associates to have gross GIIP of 1.2 and 1.8 Tcf (Pmean).

Echo will continue its exploration programme by reprocessing existing 2D seismic, followed by the acquisition of 1,200 square kilometres of 3D seismic data to validate prospective drilling of 4 exploration wells.